All for Joomla All for Webmasters

In road construction, the demands for erosion control and reclamation beneficial to site and environment are outstandingly high. The effect of hydroseeding as protection against erosion, usually is reduced to the soil surface and the rooted soil horizon.

In order to restrain very loose soil geogrids with open weave design, which allows the planting of seeds, are installed offering strong support for vegetation.

The application of erosion control geotextiles, can increase and support the vegetation erosion control effect in areas with especially steep slopes or substrates susceptible to erosion.

Organic geogrids possess the unique inherent features being composed of biologically and photo chemically degradable natural fibers. They are designed to retain soil in place until vegetation is established. By the time they start bio-degrading vegetation sprouts takes over its functions.
The organic geogrids have the following roles:

Organic geogrids are the most flexible and drapable among most types synthetic geogrids. That allows them to conform the contour of the soil surface easily. The ability to make direct contact between the fibers and the soil develops a bond between soil, vegetation and the blanket reduce soil loss by 90% or more.

In addition to their reinforcing and anchoring function, organic geogrids act as mulches that enhance the establishment of vegetation. After degradation, they leave no toxic material.

The Geojute geogrid is used to cover up slopes initially to give protection against erosion. Geojute yarns are thick with pronounced 3-D features and provide a series of mini barriers across the direction of overland flow, reducing the velocity runoff water. The openings of Geojute retain dislodged soil particles that are set to be carried away by the over land flow.
Geojute excellent drapability, allows it to shape to follow the soil contours on which it is laid. It absorbs water up to nearly from 4 - 5 times its dry weight, storing the rain fall water and preventing detachment of soil. In wet condition its flexibility increases further due to absorption of water.

Geojute, provides surface stability to steep slopes with angle up to approx. 45 deg.
Once vegetation starts growing, the role of Geojute is taken over by it. Geojute biodegrades in 2 years.
Geojute has a C factor = Soil Loss of protected surface divided by Soil Loss of unprotected surface of 0,005 and with a growth of dense vegetative cover it can protect 99.0 to 99.9 percent soil loss with a “C” factor of 0.001 to 0.01.

The Coir geogrid is a strong and durable coir fiber mesh. The open weave design allows for planting of seeds and vegetation both before and after the mat has been installed, offering strong support for vegetation.
The semi-permanent design, allows the coir Geogrid erosion control mat to have a lifespan of approximately four to six years. During this time, the soil itself is gaining in shear strength either by increased densification and/or by consolidation. After this time, the mat will slowly biodegrade, enriching soil in the area, providing a natural erosion control disposal process.
Coir geogrid has hight tensile strength (35 KN/m) and elasticity and can be installed even on very steep slopes up to approx.70deg.

On steep slopes, which are more prone to erosion, organic georgids can be in placed in conjunction with the metallic mesh. The organic geogrids are best suitable for erosion protection through vegetative growth. Once the vegetation is established the organic geogrids serve no longer as a useful protection purpose. The metallic mesh remains for the permanent active or passive slope protection.
Geojute can be placed up to 60 deg with metallic mesh support, while coir geogrid in combination with metallic netting can be installed even on vertical slopes.
As presented, organic geotextiles are a very useful tool for protecting steep slopes until the vegetation takes over, which protects the surface permanently

The beneficial role of vegetation on the slope erosion protection and stabilization is provided when the surface allows the establishment of vegetation and the expected velocity of water flowing over the surface is not of sufficient dura­tion and intensity to degrade the vegetative cover.
In severe applications (such as slopes with critical angle, high-flow channels, and pipe outlets) a vegetative cover, even well established vegetation may not be able to with­stand the erosive forces of water.
Therefore, a more resis­tant geosynthetic or metallic mesh cover must be employed and the surface that has been artificially augmented with an open structural coverage to increase its resistance to erosion above that of grass alone.

TRM R is a flexible geocomposite made by the erosion control mat TRM joined to INTERGRID, a polyester reinforcement geogrid of high tensile strength and low defromation.
The open and volumetric structure TRM R allows to retain soil layers in slopes, offering an increasement of the friction angle between the cover soil and the rest of geosynthetics (geomembrane, drainage geocomposite or bentonite clay linner). In addition, the high tensile strength and low creep of TRM R assure a long term reinforcement of the slope

- erosion control of slopes of high inclination and length.
- protection of border edges.
- landfills capping.
- new landfills.
- vegetation over a geomembrane in waterpounds.

B3. GRID 12
Grid for erosion control

PRODUCT DESCRIPTION:
U.V. stabilized polyethylene Grid 12 is designed to hold back soil, confine rock and facilitate greening. The technology used for it’s manufacturing is the «warp-knitting» process, which ensures the dimensional stability and solidity of the grids.
Geonets and geogrids made of UV-stabilized polyethylene ensure long-term soil retention.
The flexibility of the product means it follows the contours of the underlying ground, preventing the formation of voids at the grid-support. If the underlying ground is not being confined by the surface it will remain subject to the effects of subsurface water flow and erosion.
The use of Grid 12 allows to reduce the works area by creation of steeper slopes.Hydroseeding can facilitate greening immediately after the end of installation of the grid. 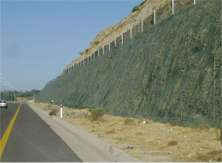